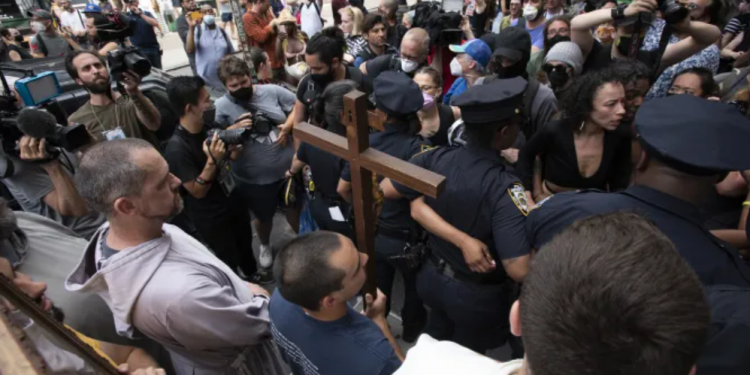 A Catholic priest who blocked access to a Planned Parenthood abortion clinic could face up to one year in prison after being found guilty Monday of violating the Freedom of Access to Clinic Entrances Act, also known as the FACE Act.

On the morning of July 7, 2022, Father Fidelis Moscinski, 52, a priest of the Franciscan Friars of the Renewal, effectively shut down the Planned Parenthood of Greater New York clinic in Hempstead for about two hours, according to the DOJ. He placed locks and chains on the gated entrance and covered some of them with glue, which prevented anyone from getting through the gate. After the fire department and the police department eventually cut through the locks, Moscinski laid down in front of the entrance to prevent cars from going through the gate, a press release from the U.S. Attorney’s Office said.

On Monday, the court delivered a guilty verdict from the bench. Post-conviction motions must be filed by Feb. 7, and the sentencing is scheduled for 2 p.m. on April 24.

,United States Attorney Breon Peace said in a statement on Sept. 29, 2022, after Moscinski was charged.

“This office will enforce federal law to protect clinics and staff that provide reproductive health services while safeguarding the rights of their patients. I commend the local police, firefighters, and bystanders who came to the health centre’s aid to ensure that it could continue serving the community.”

In an interview with EWTN on July 16, 2022, Moscinski acknowledged that he blocked access to the clinic so he could “talk to the mothers who were coming in that morning.”

“Imagine if you were one of those children scheduled to be executed that day,” Moscinski said. “Would you not want every possible effort to be made to save your life? And saying that something is a step too far is simply saying, ‘Well, some lives are less valuable than others; we could sacrifice only up to a point and then we’ll let these others die.’”

The sentencing will be before Magistrate Judge Steven Tiscione.

In the photo Father Fidelis Moscinski at a standoff between pro-life and pro-abortion demonstrators in Lower Manhattan. Source: Jeffrey Bruno/CNA