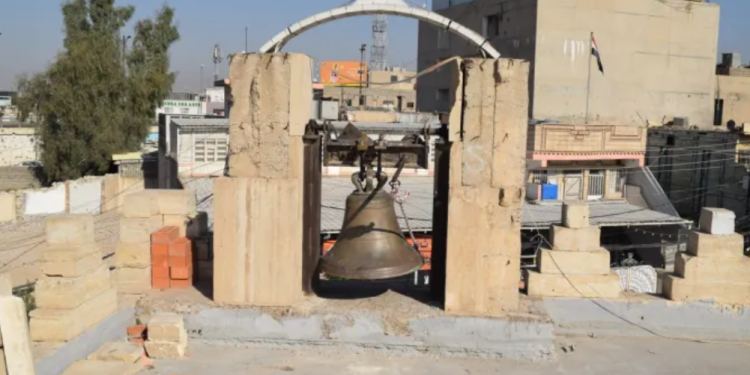 A church bell that was kept hidden by a Muslim family during the Islamic State’s occupation of Mosul rang out above St. Paul’s Chaldean Catholic Cathedral on Sunday for the first time in eight years.

Christians from across Iraq’s Nineveh Plain came to the cathedral to participate in the bell-ringing ceremony and Divine Liturgy on the 13th of November.

Archbishop Najeeb Michaeel, OP, the Chaldean archbishop of Mosul and Akra, led a procession to the grotto of the Virgin Mary, the patroness of Mosul, in the church courtyard before ceremoniously ringing the bell.

The archbishop told ACI Mena, Catholic News Agency’s Arabic-language news partner, that “the tones of the bell are an invitation … to unite hearts to denounce violence and wars.”

“We hope that all the original residents will return to their homes and return to their material and moral rights to taste the taste of safety and stability and live in the bosom of their city,” Michaeel said.

The Cathedral of St. Paul reopened in 2019 after suffering damage during the Islamic State’s occupation of Mosul from 2014 to 2017.

In Pope Francis’ historic trip to Iraq last year, the pope prayed in Mosul surrounded by the rubble of churches damaged or destroyed after the Islamic State proclaimed its caliphate in the city. The Islamic State ruled Mosul for almost three years before Iraqi and international forces reclaimed the city street by street.

Francis also made history as the first pope to offer Mass in the Chaldean rite during his visit to the Middle Eastern country. The Chaldeans are one of several Eastern Catholic communities found in Iraq. They trace their history to the early Christians through their connection with the Church of the East. Before the population was diminished by Islamic State violence, Chaldeans made up two-thirds of Iraqi Christians.

Pope Francis has continued to speak out for Christians in the Middle East. Last week, the pope spoke about the “need to preserve and encourage the Christian presence in the region” in a meeting on Nov. 10 with King Abdullah II of Jordan.