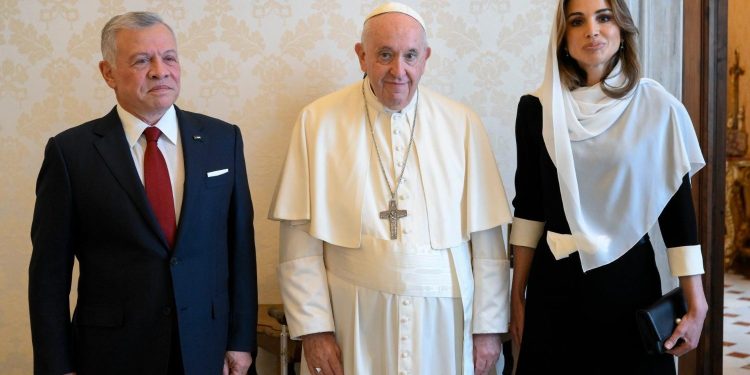 Pope Francis received King Abdullah II of Jordan on Thursday in the Vatican for ”cordial discussions” and spoke about the presence of Christians in the region, the Holy See Press office said Nov. 10.

The pope and the king spoke about the need to continue to develop interreligious and ecumenical dialogue, “always ensuring that the Catholic Church in Jordan may freely exercise her mission,” according to a Vatican statement.

Both sides expressed appreciation for the good bilateral relations between the Holy See and the Hashemite Kingdom, highlighting the importance of promoting stability and peace in the Middle East — with particular reference to the Palestinian question and the issue of refugees — and the “need to preserve and encourage the Christian presence in the region was reiterated,” the statement said.

Pope Francis has repeatedly raised the “survival of Christians in the Middle East” in discussion with Catholic bishops and Muslim leaders.

The pontiff and the King of Jordan on Thursday also agreed on a need to continue to preserve the status quo in the Holy Places in Jerusalem.

Pope Francis, who visited Jordan in 2014, met with Muslim leaders in the Gulf kingdom of Bahrain last week with a message that Catholics and Muslims alike are called to work to promote peace in the world.

On the photo: Pope Francis with Abdullah II., king of Jordan and his wife. Source: Vatican Media