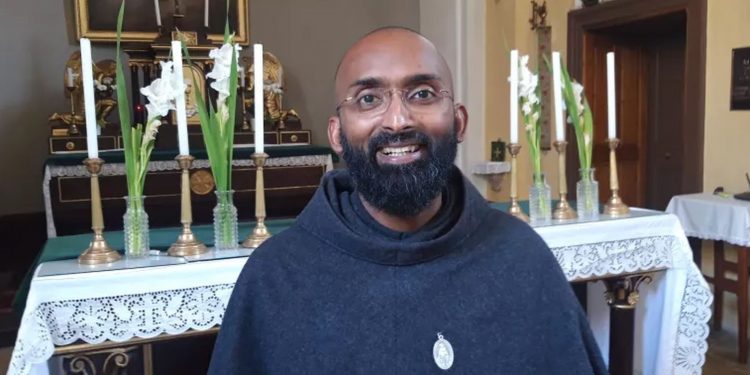 Father Joseph Parackal was born into a Christian family in India. Since 2019, he has served in a Franciscan monastery in Csicsó, Slovakia. On his way home from the most famous Hungarian pilgrimage (Pilgrimage in Csíksomlyó), he talked to a journalist of Magyar 7 about Christianity in India. He also shared his thoughts about Hungarians and their faith.

Joseph Parackal was born into a Christian Indian family. Even though Christians represent a tiny minority in India, Christianity was brought into the country in the first century by Saint Thomas the Apostle. Since then, there have always been Christians there.

Father Joseph has always been a devoted Christian, but he had not considered becoming a priest for a long time.

After school, he went to the United States to study biomedical engineering. He was offered a job at the university when he went on a holiday which completely changed his plans.

“I should have started to work at the university in August, but a friend called in July and said he would retire to a Franciscan monastery. I decided to visit him. And then, something changed. On my way to the monastery, I read the book True devotion to the Blessed Virgin Mary from Saint Louis de Monfort. In the book, the author writes that the shortest, fastest and easiest way to Jesus Christ and to the Lord is through Mary. I do not know what happened, but at the end of the journey, I was certain that I wanted to be a monk,” – he said in the interview.

He had already been ordained a priest before he came to the Carpathian Basin. He had spent nine years in Italy when he heard that a bishop was looking for monks in the Hungarian-minority inhabited part of Slovakia.

During this time, he learnt about the history of Hungary and to speak the Hungarian language. In the interview, when asked about his opinion regarding Hungary, he highlighted that Hungarians have a deep devotion to the Blessed Virgin. That is also what he experienced during the Pilgrimage to Csíksomlyó. While studying Hungarian history, he realised that Hungarians have suffered a lot, but they have always persisted. According to him, there is no faith without suffering; however, suffering has no reason without Jesus Christ.

At the end of the interview, he sent a message to Hungarians living in Slovakia. He advised them to persevere and said:

“Perhaps, here in Slovakia as well, faith and the veneration of the Virgin Mary will be what reverses the inherited fate of the Hungarians.”